Colds, flu and sinus infections create misery for people in the Midlands. Common symptoms such as stuffy or runny nose, coughing and general malaise are bad enough; when ear pain and pressure are added to the mix, you’re likely to feel downright miserable.

Why Ear Pressure Increases When You Have a Cold 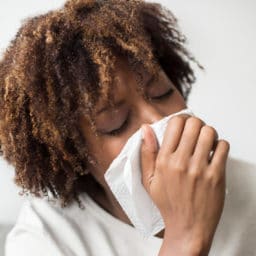 A plugged-up sensation in the ears is common anytime you are dealing with a condition that affects the head, whether a cold, allergies or infection. Because the ears, nose and throat are closely connected, a problem in one area can cause problems in others.

The Eustachian tubes play an important role in the day-to-day functioning of the ears, nose and throat region. These tubes connect the middle ears to the nasal passages and upper throat; they open and close automatically in order to adjust the pressure in your middle ear, remove excess fluids and circulate new air inside your ears.

Upper respiratory infections and allergies can create partial blockages of the Eustachian tubes due to inflammation and mucus secretion, interfering with the functioning of the tubes. This inflammation can lead to fluid buildup, which causes a plugged-up feeling and an increase in ear pressure.

In addition, the anatomy of the Eustachian tubes differs slightly from person to person. In some individuals, they are shaped in a way that creates more ear discomfort during periods of illness. Eustachian tubes that are narrower or more horizontal are prone to fluid buildup; because childrens’ tubes are smaller and naturally shaped this way while still developing, kids are far more prone to middle ear infections than adults. Other people might have more mucous linings where their Eustachian tubes open, increasing the chances of inflammation when they are sick.

Ear pressure associated with illness usually clears up once your cold or infection has run its course – but when you’re suffering from a persistent ailment that lasts a week or more, you’ll want to reduce the discomfort associated with ear pressure by relieving congestion in the nose and throat in order to keep the Eustachian tubes open. Your CENTA provder recommends the following strategies:

If your symptoms don’t improve after a few days, or you develop ear pain, fluid drainage and hearing loss, you may be experiencing an ear infection. If this is the case, schedule an appointment with a CENTA provider. They’ll be able to examine your ears thoroughly and come up with a solution to leave you feeling better.